‘12 hours to live’: a life-saving diagnosis of aTTP in the emergency room

Anise Banks knew she was unwell, knew her body well enough to know things weren’t right, but was not being heard. Admitted to an emergency room with extremely low platelet counts and seriously ill, she was diagnosed with the rare blood disorder acquired thrombotic thrombocytopenic purpura (aTTP) and given just 12 hours to live. Without the prompt diagnosis and immediate treatment she received, Anise would not be here today. This is her survivor’s story

A life hanging in the balance

In 2018, when Anise was 39 years old, she experienced the first symptoms of her yet-to-be-diagnosed rare disease. Although she had always bruised easily from birth, Anise noticed an increase in the number of bruises that were appearing on her body—not from any significant trauma but from the lightest contact. She also suffered greatly with fatigue and debilitating headaches.

Anise’s haematologist could not find a cause for the falling counts, and he continued testing, including ordering a bone marrow biopsy. Anise says the biopsy showed evidence of aTTP, but the condition was not considered at that time. Meanwhile her platelet count continued to drop, reaching just 13,000 platelets per microlitre. At this point, the haematologist misdiagnosed her with idiopathic thrombocytopenic purpura (ITP) and started treatment with rituximab. Anise was feeling so unwell that she begged him to admit to hospital, but he said that her symptoms did not merit it.

“The day afterwards, I woke up in a lot of pain and I felt like I was dying.” Anise’s urine turned a dark-red and she was drifting in and out of consciousness. Thanks to the quick thinking of her family, she was rushed to hospital.

The on-call haematologist looked at the bone marrow biopsy and recognised that it was in fact abnormal. He made a presumptive diagnosis of acquired thrombotic thrombocytopenic purpura (aTTP) based on Anise’s signs and symptoms and ordered more tests to confirm it. He said waiting the couple of days it would take to get the results was impossible: Anise needed to be treated straightaway. Estimating that Anise had just 12 hours before her condition would prove fatal, he had a large catheter inserted into her leg and he started plasma exchange.

Unfortunately, the next morning Anise had a large stroke. It has since transpired that the severe headaches she had previously reported to her doctor and haematologist were actually mini strokes.

Anise feels incredibly fortunate that the haematologist in the hospital had an awareness of aTTP and started treatment based on a presumptive diagnosis: that immediate treatment means Anise is still here to share her story., Before his intervention, Anise felt disregarded and ignored in her fight to find out what was wrong with her.

Anise spent the whole year following her diagnosis in and out of hospital. She consulted a specialist in Nashville, Tennessee, who was able to answer many of her questions. She said that Anise’s aTTP had been so aggressive that she was surprised the hospital had managed to keep her alive. With the specialist’s support, Anise’s health is now in a stable and manageable state. She continues to be vigilant in taking care of her health, having regular blood tests, being attentive to how her body feels and remaining watchful for any new symptoms.

Memory loss has been a persistent problem for Anise since her acute episode of aTTP. She says it is hard for her to remember words when she is talking, and she also tends to forget tasks that she has to do, which can be frustrating. Her day-to-day life is further impacted by her chronic fatigue.

Anise has seen a trauma counsellor to help her deal with the strain of having been so unwell and almost dying in the intensive care unit. With her help, Anise has found new ways of dealing with her condition and the trauma she went through. She recognises aTTP as an ongoing, lifelong burden because of the risk of relapse, but is learning to live with that.

Now, rather than panicking when she sees bruises on her skin, Anise chooses to see them as a sign she needs to be aware and remain alert. Having heard of many other people with aTTP experiencing relapses and crises, she feels blessed that her own aTTP is currently in remission.

“Although aTTP is my story, I don’t want to be the victim, but the victor. I turn the negatives into positives by switching the meaning of ‘TTP’ to ‘Trust The Process’, ‘Trust The Progress’, ‘Think The Positive’, ‘Take The Power’, ‘The Toughest Person/People’.”

After her diagnosis, Anise felt her future was uncertain and she still had many unanswered questions, so she started posting on social media to reach out to other people with aTTP. She uses the tags #TTP survivor, #TTPWarrior and #TTPAwareness to share her story of diagnosis and recovery and to raise disease awareness.

Often, one of the added strains of living with a rare condition is the scarcity of information and resources. The power in speaking to others with the same condition can be immeasurable. Anise’s advocacy efforts led to her meeting someone diagnosed with aTTP 12 years previously, which gave her proof that she had a condition that could be managed.

Anise is hugely grateful for the existence of support organisations, such as the Ree Wynn Foundation—founded by the late Ms Vicki Nichols after she lost her daughter to aTTP. Anise says the foundation has helped her in many ways. Through it, she has been able to connect with other aTTP survivors, learn from aTTP specialists at talks, stay up to date with new treatments and studies and hear about opportunities for research into living with aTTP.

“I am forever grateful to Ms Vicki and the Ree Wyn foundation. Ms Nichols always gave me words of encouragement and prayer—she was like family, a mentor, and I looked up to her. The foundation helped me find my voice to tell my story for the first time, and I look forward to continuing to help it spread awareness and advocate for aTTP.”

Reflecting on how aTTP has affected her, Anise says, “I know no one is promised tomorrow but aTTP hits you differently. You don’t know day by day if this is your last day on earth and that changes you. It can either change you for good—to be grateful and to love and cherish life—or it can change you for the bad so you shut down and give up. And I choose to live! I want to love, laugh and make memories with my loved ones. I choose to advocate and spread awareness, not only for aTTP but also for healthcare equity.”

Anise aims not just to raise the profile of aTTP, but also to advocate more particularly for patients in marginalised communities whose voices and experiences are often disregarded or underestimated. Anise says she was in tune with her body—she knew that something was not right—but repeatedly experienced doubt and disbelief when she raised her concerns. Her diagnosis with aTTP only came as her life hung in the balance in the emergency room. She says it is vital that healthcare professionals listen to what patients say about what they are experiencing in their own bodies.

She encourages others to fight, to be persistent in their search for answers, and to trust in their instincts. “It is important that doctors listen to their patients and act on what their patient is saying, not just on what the doctors think is going on.”

Anise hopes that there will be more training for doctors working in emergency rooms so they recognise the signs and symptoms of aTTP and understand the protocols for beginning treatment immediately if an aTTP diagnosis is suspected. As an aTTP patient in remission, she wants to be confident that doctors in an emergency room will be able to treat her if she relapses or has a crisis. She hopes to see continuing education for haematologists so that they can learn of the latest news and discoveries and have access to aTTP experts around the world. She also wishes for more awareness-raising about aTTP in African American communities and more resources designed for them.

As aTTP is an autoimmune disorder, systemic issues can have a significant impact on survivors. Anise is keen to see greater collaboration between healthcare professionals and other specialists after their platelet counts have stabilised and they are discharged from hospital.

Rising from the life-changing trauma of her acute episode of aTTP, Anise wants to use her experience as a force for good to save lives: “I went from being a patient to a survivor to an advocate. Now, I want to advocate for improvements to the racial disparities in healthcare, to help others to become literate in healthcare and to be proactive and persistent in taking care of their health.”

Sponsored by Sanofi. This content was jointly developed by Rare Revolution and Sanofi.

Sanofi is a registered trademark of Sanofi or an affiliate. 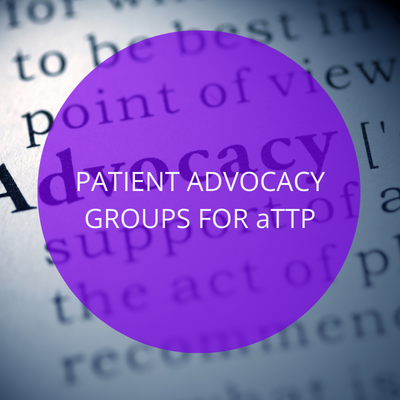 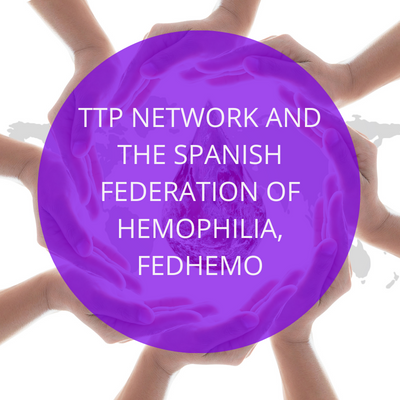 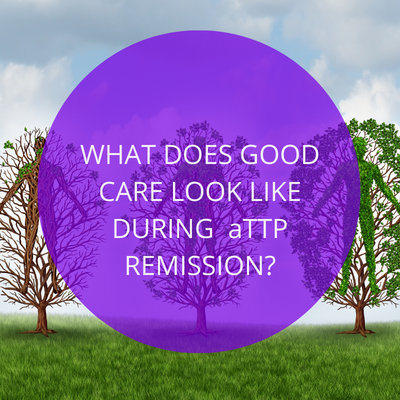 What does good care look like during aTTP remission? 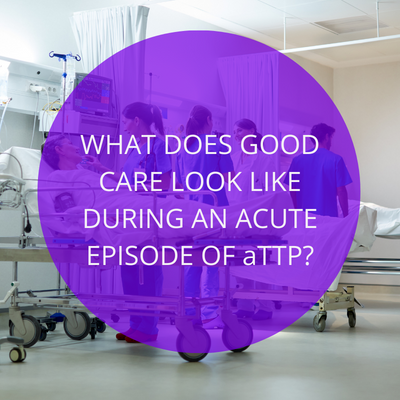 What does good care look like during an acute episode of aTTP? 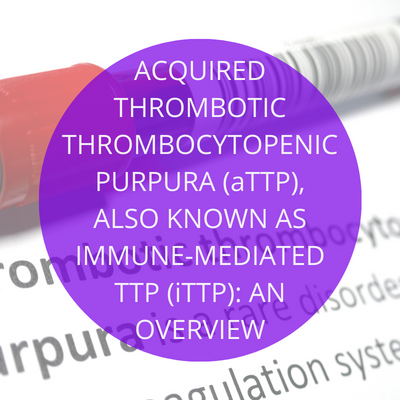 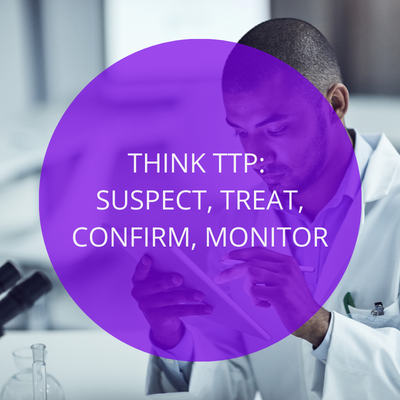